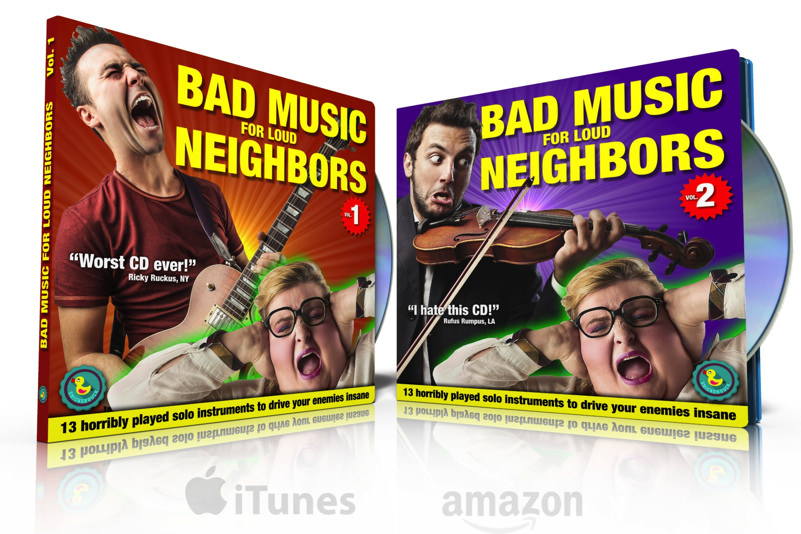 13 horribly played solo instruments to drive your enemies insane. Evil neighbors be gone! This CD makes it sound like you’ve taken up playing an instrument. Badly. For very long. Put a track on loop and leave the house. By the time you get back they’ll be packing to move.

Listen to a track: 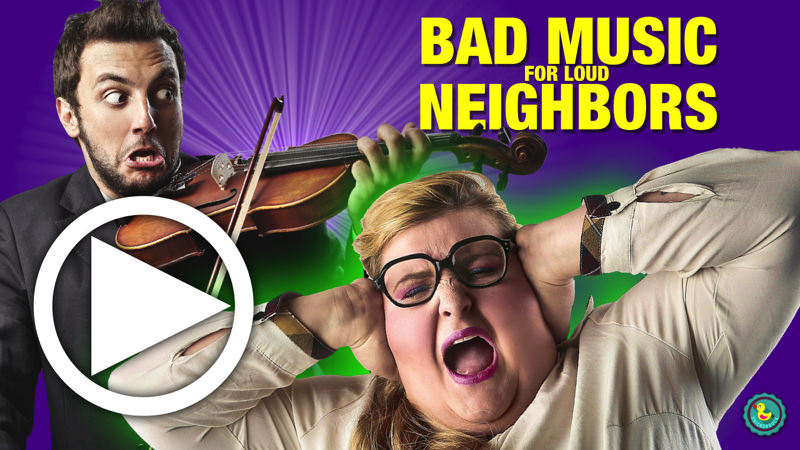 How does it work?

You know how it’s difficult to hold a conversation while someone else is talking obnoxiously? It’s the same for horrible music but with a large advantage: Badly played music attacks more parts of the brain than just ordinary loud noises. A poorly played musical instrument is impossible to ignore and will cut through walls, windows, and ambient noise like magic.

If your neighbors are “musicians” you’ll be happy to know that this CD probably contains the same solo instrument they’re playing. Just much, much worse: If they play the guitar and hear another guitar played horribly they’ll find it impossible to practice or jam. Worst of all they fear that everyone will think it’s THEM playing this crappy. Result: They stop.

Playing badly is an art

It’s harder than you think. We locked 23 gifted instrumentalists into our studio and didn’t let them leave until all tapes were filled and all bottles emptied. The result is a hilarious library of ear-bending terror nothing short of ingenious. The playing is bad enough for even tone-deaf folks to recognize as miserable musicianship but it never sounds like purposely butchering an instrument.

Each track is expertly mastered to sound as natural as it came out of the instrument: Clean and no effects added (so it sounds like your room, not like a concert stage) but all tell-tales removed (breaths, pedals, keys shouldn’t be heard from afar). Nobody will accuse you of playing a loud stereo. Instead you’ll just “practice your violin" for a few hours. Enjoy!

Written, recorded, mixed, mastered, and designed by Steve Sheraton, this CD is testament to the quirky mind of a renaissance man who can’t stop creating with little or no assistance.
If you have “iBeer”  (like 90 million other iPhone and Android users) you’re familiar with Sheraton’s sense of functional absurdist comedy. Absent from the public eye for 8 years after selling his novelty company in 2008, Sheraton is back with a personal project your enemies will love to hate. Everyone at SnickerDuck is thrilled to work with the legend who allowed us exclusive international distributorship for his hillarious oeuvre.
More about Steve Sheraton...

Swiss-born Steve Sheraton’s career started at the famed Hollywood Magic Castle into which he snuck underage (the 80s) and promptly got hired into the main show. Subsequently he starred with luminaries such as Ray Charles, headlined Las Vegas spectacles, and appeared on international TV specials.
90s TV shows loved Sheraton's wacky silent comedy reminiscent of Danny Kaye (thanks to Jim Carrey's popularity at the time) and catapulted him into headliner status at Cabaret Casino Monte Carlo and the Riviera Casino, Las Vegas. Sheraton retired from stage in 1997 and has since owned movie theaters in Switzerland, saved jazz clubs in San Francisco, broke software houses in Barcelona, and produced Grammy shortlisted CDs in Los Angeles. As a designer, cinematographer, audio engineer, coder, and cunning linguist conversing in 7 languages, Sheraton was the perfect man to found legendary novelty company “Hottrix”, which he sold in 2008 so he could dedicate his life to travel and the arts. Sheraton's son (2014) likes tripods, light switches, and ducks.

I’m sharing my passion with you: Recordings of horribly played instruments. Hi, I’m Steve Sheraton and I like to invent wacky things.
During the last 8 years of travel I befriended many musicians who were different from those I had experienced during the previous years of producing CDs and live concerts. A traveller’s friendship without strings attached, I finally found the environment necessary to bring an idea to life I’ve had for a long time: Virtuosos playing poorly.

A vaudevillian at heart, I’ve always admired the combination of music and comedy. As a magician and hobby neuroscientist the concept of “functional music” (shopping mall soundtracks, sleep aid compositions) fascinates me to no end. So I attempted to combine those disciplines into a new genre that’ll hit many nerves for different reasons. An eclectic cocktail of music and situational comedy with a dash of devious behavioral psychology.

When I settled down last summer and finally had time to master the recordings from the road my dream came true. I haven’t stopped laughing ever since. And so did everyone who heard it. For diverse motives: The strangeness of the product, the awfulness of the music, the sheer brilliance of some of the tracks (Violin and Piano are my favorite) that manage to vividly tell the touching story of ambition and comedic failure. But mainly: The instant proof-pudding, witnessing the awe-inspiring mixture of cringe, laughter, and flashbulb moment “hey I could use this on…” in everyone who hears a track.

It’s been a pleasure creating something as wacky as my last hit (iBeer for iPhone and Android) and I’m happy that “Bad Music for Loud Neighbors” outdoes its predecessor in one major aspect. It’s not just bizarre and funny, but it actually solves a real problem. This CD won’t sell as many units as said app because we all agree that beer is more important than “revenge by weaponized music” and that’s OK with you and I: After all it’s our secret weapon. Enjoy!

How does my life improve with this CD?

Because hooking up your iPhone to a stereo is a bitch. So is finding the "loop" function. And: Our CDs are perfect gifts.
If you believe in "Intelligent Home" and "Internet of Things" you'll know how to play stuff from your iPhone onto loudspeakers and can proceed to iTunes or Amazon.

Do you ship CDs worldwide? Gifts?

Hell, yeah to both. Give the gift of weaponized music and we send them your present for you.
CDs always ship the same or next day (Air Mail internationally) and arrive in 1 to 7 days.
Click to order worldwide
Click to track your CD shipment
In a hurry? Get the downloads from iTunes or Amazon.

Instant downloads? iTunes and Amazon for you!

Browse our Digital Press Pack and grab the pix, videos, and blurbs you need on http://media.snickerduck.com